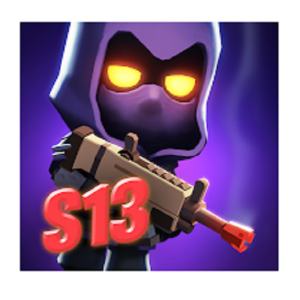 Battlelands Royale is a fun casual mobile game for everyone. 32 players, 3-5 minute battles, and a sea of insane fun! No need to wait in the lobby or puzzle with an incomprehensible menu. You start the game, land in a parachute, and loot, shoot and survive!

Dominate the arena alone or with a friend. Conquer the world with a squad of friends! Fight on a huge map with lots of fantastic locations. Whatever strategy you choose, make sure you don’t get caught up in the storm!

Win to earn trophies and advance on the global standings. Buy Battle Passes to earn even more rewards. Let other players die of envy. Unlock rare and legendary characters to instill fear in your enemies. They’ll be so scared when they see them!

A sea of weapons allows you to hone your shooting skills to perfection. Become the best shooter in town. What’s your choice: sniper or regular rifle, shotgun or pistol? Pick up boxes of supplies to be the first to get the long-awaited minigun or bazooka!

Elementary controls, fun graphics, simple but addictive gameplay make Battlelands Royale the best free game on mobile devices, from which it will be hard to break away.

So, are you ready? See you at Battlelands Royale.

Got a problem? Visit https://forums.supercheats.com/video-games/battlelands-royale or contact developers in-game by going to Settings > Help & Support.